Who was Erza Gilliland?

“I have this day abrogated your contract. Since you have been so underhanded, I shall demand refunding of all money paid you, and I do not desire you to exhibit the phonograph in Europe.” Thus signaled the death knell of a friendship that had been forged during Edison’s teenage years. Ironically, it was the inventor’s favorite invention that eventually led to the demise of his favorite friendship in 1888.

When Edison fully unleashed his tin foil phonograph upon the world in 1878, it made him an international celebrity, a renowned man of science, and earned the young inventor a new moniker, “Wizard of Menlo Park,” a term of respect that linked Edison with his earliest laboratory for research and development in Menlo Park, New Jersey.

Ezra (Ed) Gilliland, referred to as Damon by Edison after the Greek legend of Damon and Pythias, was an expert telegrapher, an inventor of the American Bell telephone switchboard, and a rising star within America’s telecommunications industry during the latter portion of the 19th century. Meeting in Adrian, Michigan as young itinerant telegraphers, their initial work relationship blossomed into a friendship over a relatively short period of time. They later relocated to Cincinnati, Ohio, where they became roommates and began operating the “Queen City” telegraph lines together.

As usually happens, the gravitational pull of one’s career aspirations and journey began to create a matrix of pathways that affected each of their individual destinies. Although they continued collaborating and helping one another on projects throughout the 1870s, each man followed their own respective path, which led to them both becoming icons in the fields of telegraphy and telephony. Conduits of life intersect; however, which allows for an occasional reemergence of great relationships and a new chapter in one’s telluric voyage to begin. Such was the case for Edison and Gilliland when they met once more during the International Electrical Exhibition of 1884 in Philadelphia.

A rekindling of their friendship had a profound impact on Edison’s life in a multitude of ways. First, it led to his formal introduction, courtship, and eventual marriage to Mina Miller. He referred to her as a “handsome brunette” with “great dazzling eyes” and essentially a “yardstick for measuring perfection” in a woman. Ezra and his wife, Lillian, owned a house around Boston for a period, and Edison traveled there several times to negotiate business transactions with American Bell as well as visit with his friends, the Gilliland’s. Although Mina was from Akron, Ohio, after graduating high school in 1883, she moved to Boston to attend Mrs. Johnson’s Finishing Seminary, which was a place designed to prepare wealthy young ladies for marriage with its associated domestic tasks and need for managing daily responsibilities of a large Victorian estate. Mina, having traveled to places like Europe and New Orleans, was more worldly than most women her age. She took an interest in studying music, excelling to the point of becoming a rather decent amateur pianist. Her musical ability was one attribute that Edison truly enjoyed and drew him closer to Mina during their initial encounters.

A 38-year-old successful inventor and businessman, crushed by the early death of his first wife, Mary Stilwell, he was a father of three young children, and very lonely on a personal level. Ezra and Lillian arranged for various social gatherings with young eligible debutantes in attendance in hopes their good friend would meet one and perhaps engage in a budding courtship that could eventually morph into something much more serious and provide a newfound happiness for Edison. During the summer of 1885, good fortune revealed itself in a form of a 20-year-old girl named Mina. After a brief courtship spanning several months, Thomas and Mina were married at her childhood home, Oak Place, in Akron on February 24, 1886. A few weeks later, they honeymooned at their new winter estate in Fort Myers.

Edison’s friendship with Gilliland paved the way for Edison’s creation of a Florida estate and eventual tropical paradise along the sprawling banks of the beautiful Caloosahatchee River. In 1885, Edison and Gilliland traveled to southwest Florida in search of warmer weather as well as to partake in certain recreational activities such as fishing and hunting, which they had been so eagerly reading about. Their visit, somewhat encouraged by Gilliland, acted as a catalyst in Edison’s purchase of 13 acres of land for $2,750 dollars, an incredible sum for its day.

Gilliland procured a sliver of land for himself, adjacent to Edison’s property, prompting both men to begin planning and mapping out their own tropical playgrounds and workspace in an area some local advertisements called “the Italy of America and the only True Sanitarium of the Occidental Hemisphere” – even going as far as claiming “equaling, if not surpassing, the bay of Naples, in grandeur of view and health-giving properties.” During the early part of 1886, Edison built his winter home, a fully equipped laboratory, and a pier, while Gilliland built an identical home next to his good friend, which today is known as the Edison Guest House.

With the dissolution of their friendship, the guest house had a sequence of owners that were free to modify or retain original structural elements and provide a vastly different, but often intriguing historical narrative, to a site that otherwise may have been much more mundane had Gilliland maintained ownership. Around October of 1886, Edison turned his attention once more to his beloved phonograph after learning about Chichester Bell, cousin to Alexander Graham Bell, and Charles Tainter’s new Graphophone with its new wax covered paper cylinder medium and flexible stylus. Much improved over his earlier tin foil model of the late 1870s, Edison grew concerned and bristled at the idea of joining forces with Bell and Tainter as proposed by them. The latter he considered an impractical man who “don’t know how to make [anything] cheap.” Edison gathered his chief assistants, including Gilliland, in an exhaustive effort to essentially redesign and reconfigure “his baby,” the phonograph. What emerged was his new and improved phonograph, which used an updated recorder and reproducer system, full wax cylinder, and a sophisticated electric motor powered by batteries that were in theory supposed to enhance its overall function. Edison moved quickly, marketing his recently unveiled creation as a business dictating machine, while effectively going to battle against his competition in a no-holdsbarred match within the coliseum called capitalism. Fully engaged, Gilliland began moving further into Edison’s gravitational pull, allying himself with his old friend and becoming the “mouthpiece” and marketeer for Edison’s new business venture.

Already making a decent salary in Edison’s employ, Gilliland now convinced his friend to sign a generous contract prepared by Edison’s business attorney, John C. Tomlinson, which in essence gave Gilliland the right to sell phonographs within the United States and Canada, giving Ezra a 15 percent markup on sales. Unfortunately, this proved to be the beginning of the end for a once strong bond between these two men. Their association with one another became one of many casualties Edison experienced over his 62-year career. The struggles and stress of building and maintaining this segment of his corporate empire played a role, coupled with the fact that Gilliland began seeing himself as more of an equal partner and less of a subordinate did not go unnoticedby Edison, who exclusively saw himself as the superior in almost every aspect of his business life.

The end came fast and furious in 1888, when entities revolving around Edison’s phonograph as well as his competitor’s Graphophone clashed in an effort to gain control of the marketplace. A new “player” appeared almost out of nowhere, Jesse Lippincott, a wealthy businessman who made millions in the glass industry, manufacturing tumblers and such. Looking for another lucrative trade to conquer, he negotiated an exclusive license to market the Graphophone, but feared Edison’s machine would prevent him from monopolizing this industry. Gilliland invited Lippincott to examine Edison’s phonograph and what transpired from this meeting eventually destroyed his friendship with “America’s inventor.”

Lippincott opened negotiations with Gilliland on the purchase of the Edison Phonograph Company for a sum of $500,000. Ezra took it upon himself to act as Edison’s representative, hosting meetings and working out many of the finite details. Enlisting Tomlinson as his liaison and legal counsel, Edison was effectively “in the dark” during this early stage. Tomlinson began feeding bits and pieces of information to Edison and trying to complete a deal with Lippincott that would give the latter entire control, all while Gilliland and Tomlinson profited financially for their contributions in accomplishing this mighty task.

Edison was astute enough to demand he retain manufacturing rights and overall product control; however, he finally agreed to a contract in June of 1888 that would essentially grant Lippincott all marketing rights, which in turn gave him the ability to greatly influence its direction. A side deal, unknown to Edison, was created between Lippincott, Gilliland, and Tomlinson whereas the former would purchase Ezra’s contract previously signed with Edison, and in exchange for canceling its terms, provide Gilliland $250,000 worth of capital stock with cash options in a new company designed to promote, market, sell and exploit both machines. Tomlinson was also supposed to receive a portion for his role in finalizing the process with Edison. Over the next few months their scheme began to unravel. Lippincott had difficulties making his initial payment to Edison in regards to their agreed upon contract. In meeting with Edison directly, he began divulging everything; his pursuit of obtaining various rights, contract setup, the unspecified side arrangement, cash and stock with Gilliland and Tomlinson.

A furious Edison, hurt and betrayed, sent a message to his soon to be ex-friend Gilliland, who was in Europe promoting his phonograph, terminating his employment and basically their friendship. The same was done with his lawyer, Tomlinson. Edison would file a lawsuit against both men in 1889, alleging fraud in negotiations involving Jesse Lippincott and Edison’s company. They would never speak face-to-face again, creating an awkward and untenable situation in Fort Myers. Edison purposely made the living situation unbearable for Gilliland with his elimination of electric power and viable water source, among other things, which prompted Ezra to sell his Florida property to Ambrose McGregor, a top-level executive and key stockholder in Standard Oil.

As a result, a new and exciting historical narrative materialized, with multiple owners and storylines, culminating with Thomas and Mina purchasing the property in 1906 and transforming it into their guest house by 1908. Many famous historical figures in American history would either stay or dine within its walls, including Henry Ford, Harvey Firestone, John Burroughs, and President-elect, Herbert Hoover. Today, visitors can see the guest house standing tall next to Edison’s main house. 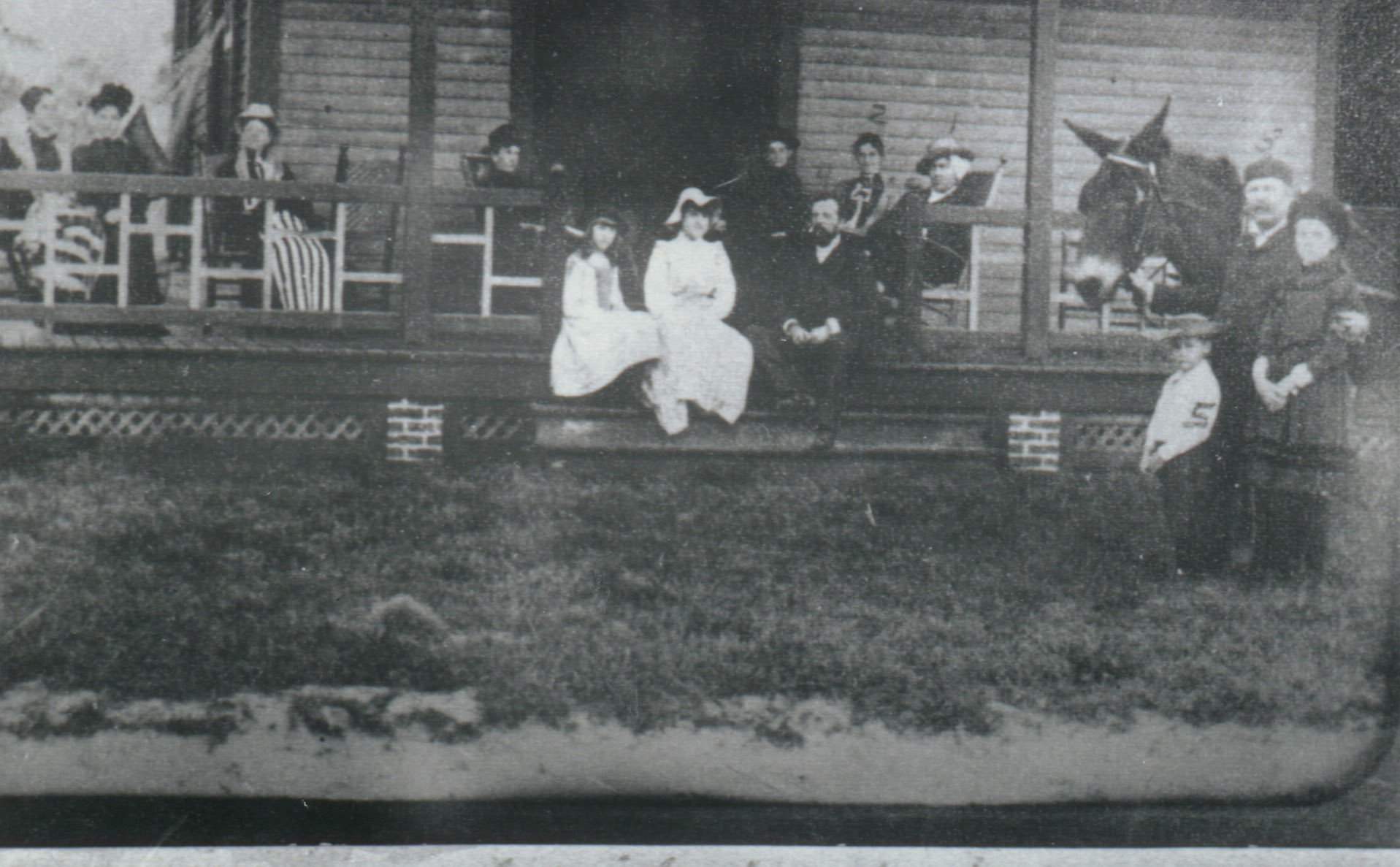