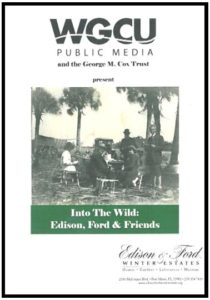 Into the Wild: Edison, Ford & Friends has been selected for national distribution to more than 350 public television stations across the nation.  The half-hour documentary produced by WGCU-TV brings to life the annual camping excursions of three famous American legends – Thomas Edison, Henry Ford and John Burroughs – that began with a 1914 trek into the Everglades.  The initial campfire camaraderie inspired a series of camping trips throughout the eastern United States for the next 10 years, providing the renowned trio with relaxation, exploration and a chance to get in touch with the American public.

Award-winning, Naples-based researcher, writer and producer Lynne Howard Frazier, produced Into the Wild for WGCU, and it premiered in April 2011 in Southwest Florida.  It follows two other documentaries WGCU has produced on America’s most famous inventor.  Untold Stories: Edison’s Quest for Rubber explores Edison’s search for a sustainable source of rubber through botanical research at his Fort Myers laboratory.  Untold Stories: The Wizard’s Wife examines how Mina Edison played the role of community leader during the family’s seasonal stays in Southwest Florida.

“It’s one of the first history programs that goes beyond our region, but is still focused on Thomas Edison,” say WGCU Executive Producer Barbara Linstrom.  “It’s a great example of the partnership we’ve developed with the Edison and Ford Winter Estates.  We couldn’t have produced such a quality program without their assistance, including the archival footage we were able to obtain.”

Into the Wild was approved by a majority vote of subscribers of American Public Television, a leading distributor of high-quality, top-rated programming to America’s public television stations since 1961.  Into the Wild is slated for national release in May and 359 stations in the public television system will have three years to run the documentary in their market.

“It’s a great opportunity to share Southwest Florida’s rich history with the rest of the country,” say Linstrom.

Several other documentaries produced as part of WGCU’s “Untold Stories” history series have been distributed nationally in recent years, including: The Unconquered Seminoles; Protecting Paradise: The Western Everglades; Edge of the Everglades: Big Cypress National Preserve; The Wizard’s Wife; and First Pitch. 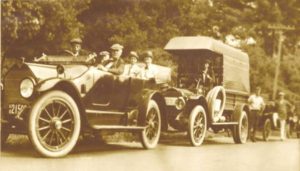 If you miss the episode, copies of the program are available for purchase in the Edison Ford Museum Store or on-line at www.edisonfordwinterestates.org.

Related post: Into the Wild: The Camping Adventures of Edison, Ford, and Friends