On November 11, America will celebrate Veterans Day. It’s a day we salute our military veterans whose service to our country has helped protect and preserve our many cherished freedoms and constitutional rights over the years. Although many communities around this great nation commemorate Veterans Day with ceremonies, parades, and memorial services; some may not even know the significance of November 11 and why this date serves as a national holiday.

World War I officially ended on June 28, 1919 with the signing of a peace agreement known as the Treaty of Versailles, named after the town where it was signed, between main Central Power Germany and principal western Allied & Associated powers (France, Great Britain, Italy, and United States). The cessation of battlefield hostilities occurred at a much earlier date; however, with the signing of an armistice with Germany on November 11, 1918 at 11 a.m. Military historians sometimes refer to this event simply as “11-11-11,” essentially meaning the eleventh hour of the eleventh day of the eleventh month. In November 1919, President Woodrow Wilson proclaimed November 11 as “Armistice Day” to commemorate the end of the “Great War” in Europe by stating: “To us in America, the reflections of Armistice Day will be filled with solemn pride in the heroism of those who died in the country’s service and with gratitude for the victory, both because of the opportunity it has given America to show her sympathy with peace and justice in the councils of the nations.”

The original idea was a day of celebration to be observed by parades, public meetings, and suspension of business at 11 a.m. By an act of United States Congress, Armistice Day became a national holiday on May 13, 1938, dedicated to world peace. Early on, November 11 was primarily set aside to honor veterans of World War I, but on June 1, 1954 congress approved legislation to honor veterans of all wars, especially those that had served in World War II and Korea, and substituted the word “Veteran” for “Armistice.” November 11, 1954 was the first celebration of the newly named “Veterans Day.”

Many people are unfamiliar with Henry Ford’s contribution during World War I and his company’s role in helping bring about an armistice that ultimately led to the creation of Veterans Day decades later. Prior to America’s entry into World War I on April 6, 1917, Henry Ford was a devout pacifist and highly critical of those who were advocating for the United States to become involved in the European conflict, especially ones he thought would profit immensely from its involvement. 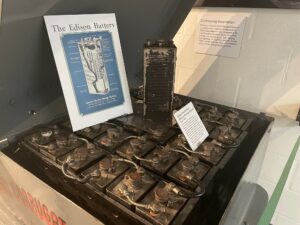 By 1917, things had changed and the international situation threatened to envelope America as “the war to end all wars” had morphed into a stalemate, with distinctive battle lines that saw entire armies in trenches and thousands more strewn across an increasingly bloody landscape. Unrestricted submarine warfare preyed on merchant shipping thus disrupting America’s precarious supply lines and export industry, including those sending munitions and equipment to various warring nation-states. International diplomatic relations began to rise and fall as the war steadily produced a web of alliances and innumerable promises between nations on the spoils of war (rewards) in exchange for assistance in advancing their particular cause.

Ford’s first real significant contribution to the war effort was not military related, but focused on a major domestic issue created by the war itself. Severe food shortages plagued England and as the situation grew even more desperate by the summer of 1917, farming equipment was badly needed. Help came in the form of the Fordson tractor, which featured cleated tires and a 12-inch double-bottomed plow that Ford sold at cost ($750) thus forgoing profits in an effort to ease England’s humanitarian crisis. Beyond the nearly 7,000 sent abroad, another 27,167 were sold to American farmers as a way to deal with any food shortages that might arise on the home front.

Although morally conflicted about America’s formal entry into the war, Henry Ford pledged to work as hard as ever to help the Allies achieve final victory in Europe. From the summer of 1917 through autumn of 1918, the Ford Motor Company employed thousands of factory workers, many of them women, to build and produce 39,000 military cars, trucks, and ambulances, more than 1 million steel army helmets, nearly 4,000 Liberty engines for America’s nascent Army Air Service, more than 415,000 cylinders, tank armor, submarine detectors, and a prototype bomb (a precursor to Germany’s V-1 rocket of WWII, which was simply referred to as a robot airplane bomb).

In addition to this, Ford built a massive 1,700-feet-long by 350-feet-wide shipbuilding plant with the  assistance of the United States government. Inside this building, Ford manufactured 615-ton watercraft known as “Eagle” submarine patrol-boat chasers. These were to be used against Germany’s first iteration of wolfpack submarines. Sixty of these vessels had been completed and commissioned by war’s end, with hundreds more to be built if the conflict continued. Ford’s two-man “flivver tanks” project was abandoned during the latter stages of World War I; but the Ford Motor Company found other ways to contribute by enthusiastically hosting Liberty Loan and Red Cross drives as well as making military training and promotional films publicizing activities conducted by different branches of service. In the end, Ford served as architect and engineer for one of America’s factories of democracy, building a bridge to victory, and ultimately leading to an armistice that would be the foundation for a national holiday called Veterans Day.