Tis the Season to Twinkle!

Season’s Greetings everyone! The 2021 Christmas season is upon us, which means an annual tradition known as Holiday Nights has officially begun at the Estates. Featuring thousands of lights, Victorian style decorations, and occasional visits from Father Christmas (Santa Claus) himself, visitors far and wide make it an annual pilgrimage to witness the Edison and Ford properties gleaming in all their glory. This year’s event is titled “Holidays under the stars,” which is a subtle tribute to Edison and Ford’s famous Vagabond camping trips that also included industrialist Harvey Firestone and naturalist John Burroughs.

The holidays were always a festive and joyful time for Mina Edison. Out of 26 visits from 1886-1931, only once did Thomas and Mina Edison spend Christmas in Fort Myers (1929). Although at their main residence (Glenmont) in Orange, New Jersey, elaborate decorations and large gatherings of 20-30 guests were commonplace. Their yuletide experience at Seminole Lodge was much different, subdued with minimal decorations and a rather small gathering for Christmas dinner. Many years, Mina selected a theme and decorated the Glenmont with appropriate embellishments and trimmings, thus providing every holiday season with a distinctive character and unique ambiance. In 1925 for example, Mina dressed up as the “Old Woman who Lived in a Shoe” from an old-fashion children’s nursery rhyme and decided to build a gigantic faux shoe replete with wrapped gifts and various decorations.

In various letters and interviews, Madeleine, Charles, and Theodore Edison reminisced about their holiday traditions, which in earlier years consisted of staying up until midnight on Christmas Eve, waking early the next morning, checking for snow first thing, singing Christmas carols at their parents’ bedroom door, waking the “old man” and wishing everyone a hearty Merry Christmas! Afterward, stockings were retrieved from their private sitting room, contents emptied and opened for all to see, and then breakfast. Only after mealtime were they allowed to gaze upon the family Christmas tree, when dining room doors leading toward the formal den area were opened, revealing the tree in all its majestic splendor! Hanging from its branches were several feet of gold and silver balls and yards and yards of tinsel. Colored electric lamps were nestled throughout, creating a dazzling display of lights and considered by them to be much safer and prettier than candles. Later, dinner guests were treated to a multi-course meal and afterward escorted to the den to listen to music, as well as sift through and distribute copious amounts of gifts. The Edisons were also inveterate pranksters and on one such
occasion according to Theodore:

“One incident was my mother was giving my sister some very fine set of china. My sister knew she was getting it, too. So my cousin, I think it was, Lewis Miller, and Uncle John Miller, they were distributing the presents around. A lot of people sat around the edge of the room, you see, and then certain ones would go and pick them up and bring them to the people around the edge. And so my cousin was just getting this box of china, he’d found under the tree, and he was down here, and he had had it in his hand, and my uncle was getting some other present for somebody else, and he was down here, and he straightened up, knocked this box right out of my cousin’s hand, and it fell on the floor and broke in a thousand pieces. Well, my sister was fit to be tied over this beautiful china that was coming to her. … And then it turned out that this was a lot of old broken dishes that they’d gotten in the five and ten cent store some place, the discards, and they had it all there, and was all [an act] But they carried it off, you know. It looked just as if it had happened.” 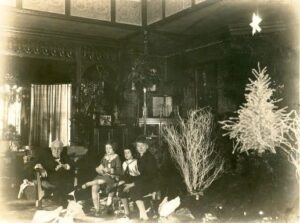 A good time was had by all, and invaluable memories made and cherished for several generations to come. Rachel Miller shared her thoughts with Aunt Mina in 1922:

“Before I go to bed I want you to know what a perfect Christmas I had with you all at Glenmont. It seems to me it was never more beautiful and somehow the whole place and everyone just radiated love. What a lovely idea those tableaux were! It made an unusual Christmas and one that will stand out in everyone’s minds … I don’t believe Teddy and Jack will ever forget this one. They were certainly dear little fellows and awfully patient when they were so keen to see what they had. Jack was so proud of his umbrella. He took it to bed with him. Did you know that? And thank Thomas, I never forget that he makes it all possible. He seemed to enjoy it all so much this time.”

Thomas and Mina Edison arrived earlier than normal for their winter stay of 1930, traveling to Fort Myers in December 1929. The last few months of that year had been a distressing end to an indomitable decade, one filled with unbridled business prosperity, economic expansion, and a pop-culture revolution characterized by jazz music, carefree living, and excessive consumerism. Mina was quite active in the city’s civic and social affairs and as President of the Fort Myers Roundtable – a group made up of prominent citizens and business leaders – collaborated with The Welfare Board to solicit financial funds, procure groceries, and retain the services of someone to assume the role of Santa in order to distribute food baskets to needy residents. Officially known as the Santa Claus Fund, Mina’s goal was to raise $300. Mr. and Mrs. Edison, themselves, donated twenty dollars, which is equivalent to $321 dollars in today’s monetary conversion. According to the Fort Myers Press, Santa’s campaign was a success with several dozen baskets being assembled, packed, and
given away to those in need.

On Christmas Eve, Mina served as master of ceremony for the lighting of the town’s communal tree, attended a special service at St. Luke’s Episcopal Church and spent a quiet evening at Seminole Lodge. December 25 came with little commotion as Edison spent his morning reading a book, then attending a movie at the Arcade theater, where according to local newspaper accounts, 650 rambunctious kids nearly tore its roof off over the amalgamation of free movies, ice cream, candy, and a visit from Santa. Around 4 p.m., Mina and Thomas entertained a small circle of friends for dinner, with the inventor forgoing a larger meal for his customary glass of milk. Gifts poured in from all over the United States: books from publishers, clothing from various makers, a hat that was a tad large for his head, shoes, and cards from hundreds of well-wishers. Even on Christmas, Edison could not stay away from his laboratory as the great inventor took a stroll through his rubber research gardens, examining different plants, and making notes as he went along. He retired early and was up before dawn the following day to resume his assiduous work schedule. As fast as it came, the holiday was over.

To learn more, join us for one of our nightly Holiday Guided Tours at 6 and 7 p.m. through January 2 (closed Christmas Day). We wish everyone a happy holiday season!