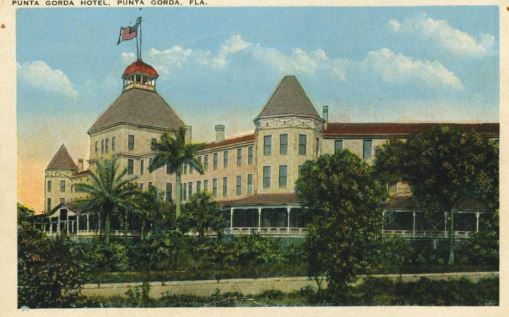 Punta Gorda is a city of about 20,000 inhabitants, and geographically located about 40 minutes north of Fort Myers. The town was a stopping point for many on the way to Fort Myers, including Thomas Edison, Henry Ford, and Harvey Firestone. These men traveled into the Punta Gorda train depot from up north and stayed at the Punta Gorda Hotel across Tamiami Trail from the depot.

When Edison first arrived in Southwest Florida in the mid-1880s, Punta Gorda only had about 250 residents. The Punta Gorda Hotel was one of the first buildings constructed in the town and opened in January of 1888. It was a three-story building with 150 rooms, designed in the Queen Anne architectural style and faced the Charlotte Harbor, looking toward Port Charlotte across the Peace River. It stood within the empty lot of what is now surrounded by northbound Highway 41, W. Marion Avenue, Taylor Street and W. Retta Esplanade.

During its first season, it served more than 3,300 guests. The hotel had modern fixtures of the time such as gas lighting, electric bells, steam heat and open fireplaces. The grounds were landscaped with camphor trees and palms. The hotel attracted such famous dignitaries as Thomas Edison, Henry Ford, Harvey Firestone, Theodore Roosevelt, John Wanamaker, and family members of the firearms manufacturer Samuel Colt.

During the early 1900s the hotel experienced a period of decline. Ownership changes occurred and in 1924, the Florida land developer, Barron Collier acquired the hotel. He renamed it Hotel Charlotte Harbor and expanded the grounds for beautification. Collier installed stucco on the exterior of the building, added a fourth-floor ballroom, new tennis courts, a boat basin, a 176-foot-by-80-foot swimming pool, and arches to the porches, giving the hotel a look of Spanish Eclectic style. Under Collier’s leadership, the hotel flourished but it went through hard times during the Great Depression. In 1944, Collier sold the hotel and then in the mid1950s it was briefly turned into a health spa called the Charlotte Harbor Spa. The building was destroyed by fire in August of 1959. The flames were so massive that they could be seen on the horizon in Fort Myers. Punta Gorda’s second railroad station was a stopping point where many famous people came through on their way to South Florida, including Thomas Edison, Henry Ford, and Harvey Firestone. When the Collier bridge was built across Charlotte Harbor in 1931 for automobile traffic, the station went into decline and was briefly used as a bus station. The Punta Gorda station was torn down in 1967. The hotel stands on the site of where Punta Gorda’s second train depot existed, in which Edison, Ford and Firestone arrived from New Jersey by train.

When Edison arrived in Punta Gorda, he enjoyed visiting with a telegrapher by the name of Willie White. She was a well-known citizen of Punta Gorda because of her intuition with Morse Code and sent many of the telegrams going in and out of Punta Gorda for years. When Edison visited Willie, it was usually at Punta Gorda’s Dade Hotel, which housed the Western Union office in 1887. According to the Charlotte Harbor history book about Edison and Willie White, When he (Edison) was known to be on the train, the Fort Myers steamer was held for him. Edison knew this but always dreamed up an excuse for an urgent telegram to keep the boat waiting while he visited Miss Willie. As a former telegrapher himself, Edison watched with admiration while Miss Willie clicked off his messages. Undoubtedly Miss Willie worked her key with extra speed on those occasions in order to impress the great inventor.

According to one source, Edison said “Operators like you and me are not made, they have to be born.”

Miss Willie was pleased by the adulation of Edison and looked forward to his visits. Besides the flattery of his attention, she was intrigued by the fact that Edison always seemed to be wearing the same gray suit “which the train trip had done nothing for whatsoever.”

Edison had a connection with the second bridge built over Charlotte Harbor on the Tamiami Trail at Punta Gorda. The first bridge built across the harbor was opened in early July of 1921. The bridge was poorly built, and the concrete was made mostly of beach sand and harbor water with inferior concrete. Salt in the mixture eventually eroded the reinforcing rods and large chunks of concrete broke away from the structure over a short period of time. Because of this and increasing automobile traffic, a second bridge was needed.

The second bridge was constructed where the first one existed and was completed in early June of 1931. Thomas Edison was one of the first people to cross it. John Hagan, Jr. was the official driver to be in the first car to cross the bridge. On June 14, Edison was driven across by Hagan, along with Mina, Charles, and his wife Carolyn. Thomas Edison passed away on October 18, 1931.