The History of the Christmas Light 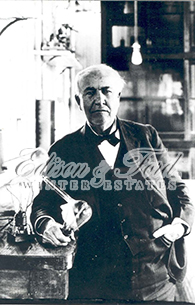 In 1878, Thomas Edison began the difficult process of perfecting the electric light bulb. Just two years later, during the Christmas season of 1880, Edison displayed a strand of electric lights outside his lab in Menlo Park, New Jersey. Passersby on a nearby train would have been among the first to witness what would become a defining trend in the way America celebrates Christmas.

Each year, this Christmas tradition is celebrated at the Edison and Ford Winter Estates. Join us for our Holiday Nights celebration, or consider indulging in a Holiday Nights Behind the Scenes tour, offered every Tuesday in December (except Christmas day) at 6:00pm. Call (239) 334-7419 for more information or to make reservations.