The Bluebird of Happiness

The Bluebird of Happiness 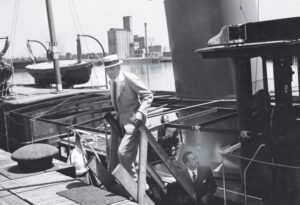 Most people know about Henry Ford’s work within the automobile industry. Even today, many consider Ford to be one of the most prominent and influential industrialists in American history. His iconic Model T made him an international celebrity, and his moving automotive assembly line transformed him into the master of mass production.

Far less is known about Ford’s love for birds and boating, however. Young Ford’s first vivid memory was his father, William Ford, taking him and his little brother, John, to see a bird’s nest hidden under a large oak log near their family’s farm. According to Ford, it had four eggs and a mother bird was chirping and singing loudly. The memories of that birdsong stayed with him long after that day, and later in life he developed a love for birds, which was undoubtedly, and unconsciously, connected to this experience with his father.

His affection for birds extended to his boating endeavors as well, when in 1917, Ford purchased a large, beautiful steam yacht called Sialia, the scientific name for Eastern Bluebird. Built around 1913 in Wilmington, Delaware, it was designed and constructed by preeminent shipbuilders, the Pusey and Jones Company, for John K. Stewart, one of the partners at Stewart-Warner Speedometer Company. Ford was drawn to the vessel’s name and retained it during his ownership. At a cost of $250,000, it was a 202-foot oceangoing, twin screw steel schooner, weighing an impressive 552 gross tons, equipped with triple expansion oil-fired steam turbines generating 1,250 horsepower, had a fuel capacity of 150 tons, and a top speed of 16 knots. (18.4 mph). Reportedly, Henry Ford flew a House Flag on his yacht called the “Bluebird Of Happiness.” It was flown every time Ford was aboard and was later transferred to another ship called the M/S Henry Ford II.

The Sialia was technologically advanced for its time as it included a state-of-the-art Telefunken wireless communication system as well. Ford initially intended to use the Sialia for business purposes as his preferred mode of transportation during trips investigating possible industrial resources for his manufacturing plant. One such occasion occurred in 1917, when he traveled to Cuba to inspect the island’s source of coal and iron ore. No transactions resulted from this expedition, however.

It quickly became a recreational watercraft as Henry began using his enormous yacht as a means of conveyance for family and friends during various excursions, including those to southwest Florida. The Sialia would eventually make the first of two voyages to Fort Myers in 1917, anchoring near Punta Rassa, next to the Sanibel Lighthouse, which was considered a deep-water port. Ford arrived at his winter home, “The Mangoes,” via a motor launch up the Caloosahatchee, as the river was too shallow to allow safe passage of this large vessel.

Upon its journey home to Dearborn, Michigan, Ford received word by wireless communication that his vessel had been enrolled, or “commandeered,” for Naval Coast Guard Defense as part of America’s ongoing war effort against Germany’s sink-all-ships policy. The United States Navy Special Board for Patrol Vessels offered only $220,000 as compensation, but Henry did not object and accepted their modest proposal for what he considered a service to his nation.

Henry’s yacht reported for World War I service and was commissioned in June of 1917 as the USS Sialia (SP-543). It was employed as a patrol vessel near Philadelphia, but in April of 1918 was transferred to Hampton Roads, Virginia, thus performing flagship duties for Cruiser and Transport Forces. After World War I, the Sialia was loaned to the U.S. Coast and Geodetic Survey from June 10, 1919, until March 15, 1920. A month later, Ford repurchased the yacht back from the United States Navy for $168,500, subsequently spending an extra $150,000 to refurbish it. During the 1920s, it was used to travel in and around the Great Lakes area, including Henry’s 1924 “Vagabond” trip with Thomas Edison and Harvey Firestone to the upper peninsula of Michigan where it ferried the three famous friends across Lake Michigan and later returned them to Dearborn.

For years, Ford was dissatisfied with its speed, so in 1925 he spent more than 1.5 million dollars to have the American Shipbuilding Company rebuild its frame, install twin piston diesel engines, and enlarge its size to 223 feet. Much to his chagrin, it ran slower afterward than before. Ford again brought his yacht to Florida in 1926, first stopping in St. Augustine, then to Boca Grande, where his ship was quarantined for two days before being able to proceed to Punta Rassa on March 8. Mrs. Ford again took the motor launch to Fort Myers, while Henry decided to walk into town, but upon her arrival ordered a car to retrieve her husband. He made it a total of seven miles before rescue showed up.

The Sialia remained in use for a few more years and usually docked at its home port, Ford Motor Company’s Rouge plant. Although a little murky, it appears that by 1929 the Sialia was linked to Edsel Ford, and photographic evidence further indicates the yacht almost sank upon hitting a reef near Boston. It was towed to Atlantic Works, East Boston, Massachusetts, by salvage vessel Resolute, pumped out and kept afloat.

Evidence reveals that in 1935, a company called A.N. Andrews Investment Corp. sold the Sialia to Evan Jones. It was later sold in 1939 to Milton Jackson, Clipper Lines, Inc., and renamed the Yankee Clipper. Reacquired by the United States Navy on November 25, 1940, it was recommissioned as patrol yacht USS Coral (PY 15) in February 1941 and initially commanded by Lt. Commander W.H. Meyer. USS Coral served inshore patrol duty near Philadelphia and New Port, Rhode Island before being reassigned to Guantanamo Bay, Cuba for training exercises.

Records indicate that in 1943 it was part of Service Squadron 9, based in Key West, Florida, but in August was sent to Norfolk, Virginia to participate in an escort convoy. The USS Coral was decommissioned on September 10, 1943, under command of Lt. Commander John H. Church, Jr. It appears the vessel was never used again during World War II. Sold by the Navy on July 15, 1947, no records were found documenting its journey from there, but believed to have been scrapped for its metal at that point. An undistinguished ending for a remarkable ship that once soared through blue waters with many singing the praises of a yacht called Sialia.