Robert C. Halgrim was an influential figure who worked very closely with Thomas Edison and made lasting impacts on important organizations throughout Fort Myers. He was born on September 9, 1905, in Humboldt, Iowa, and moved to the City of Palms – Fort Myers’ nickname – with his family as a young boy. His father, Conelius Halgrim, decided to move the family to Southwest Florida to grow castor beans, which yielded castor oil needed for airplane lubrication. Conelius obtained a contract from the Government and bought more than 1,000 acres of land at $1.25 per acre for his plantation during World War I. Today, this is the location of the Lee County Civic Center, which is used to
host a variety of public events.

Col. Halgrim also owned and operated the Court Theater, located in the Patio de Leon in downtown Fort Myers. As a teenager, Bob Halgrim worked at the theatre collecting tickets, where he met Thomas Edison for the first time. According to the Fort Myers Press, the world-famous inventor would attend showings of silent films two times a week during his winter vacations after the theatre opened. Halgrim would inform Edison when a new feature arrived, and the inventor typically brought groups of friends and family members to the first screening. Edison would sit in the first row by himself eating peanuts and his guests sat further back in the middle rows.

Halgrim began working for the Edisons in 1926. Two of Thomas and Mina Edison’s grandchildren, Jack and Ted Sloane, accompanied the couple on a trip. Mina Edison anticipated their stay with the two boys (ages 9 and 7), so she contacted the local Scoutmaster of Troop 1 to hire a young man to look after them. The Scoutmaster gave Mina the names of two well-known men in the community he thought would be a good fit, Robert (Bob) Halgrim and John Woolslair. Halgrim was a former counselor at Camp Jungle Wild (later Camp Ropaco) in Alva near the Caloosahatchee River. Edison was also very impressed with the young scout when he met him at the theatre, so they hired Robert to look after the boys. They did many activities together at Seminole Lodge, including fishing off the pier, sailing and canoeing in the Caloosahatchee River, and exploring Yellow Fever Creek. 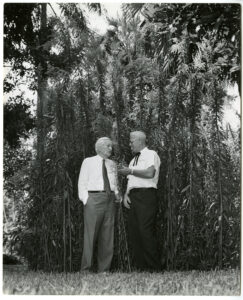 Charles Edison and Bob Halgrim stand in front of Goldenrod, the plant Edison found the most success with during his search for a natural source of rubber in the United States.

On a nice warm day, the teen spent time giving the boys lifesaving and swimming lessons at the Edison’s pool, one of the first residential pools constructed (in 1910) in the City of Fort Myers. Not only did Halgrim spend time with the Edisons in Fort Myers, but he traveled with the family to the Sloane’s summer house at Fisher’s Island. At the time, Thomas Edison was searching for a natural source of rubber that could be produced in the United States. The world-famous inventor’s goal was to produce an emergency supply of rubber that could be used for military equipment. Halgrim assisted with this project and collected plant specimens that were tested for rubber content at the Edison West Orange New Jersey lab.

After Halgrim graduated from Fort Myers High School in 1926, he continued conducting research at the Edison Botanic Research Laboratory in Fort Myers, the headquarters of the rubber project. Mina Edison placed a high value on education and wanted Robert to attend college; however, Edison preferred that he work for him fulltime. The young man later attended Cornell University with Mina Edison’s help, where he studied horticulture. While he was at Cornell, Robert frequently visited Thomas and Mina’s Glenmont
estate and stayed in their son, Theodore’s room. 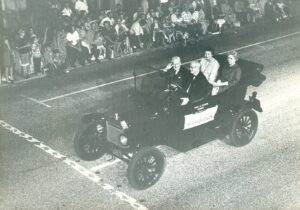 Charles Edison is driven by Robert Halgrim in a Model T through the streets of Fort Myers during the 1967 Edison
Pagent of Light Parade .

According to an oral history conducted by Florida Gulf Coast University, Mrs. Edison gave the young man $200 to help him feel better about this decision since Edison was not in agreement. In 1929, Edison convinced Halgrim to return to his lab in Fort Myers and develop a rubber plantation on the east side of the property. The former student recalled that Edison made his employees feel at ease, calling them by their first names. Many of the staff did not feel like they were working with a living legend and appreciated that they could share a couple of laughs together on occasion. While Edison spent countless hours on his research, Halgrim took the time to care for his mentor, bringing him meals every few hours.

After Thomas Edison passed away in 1931, Mina Edison searched for ways that she could honor her husband’s legacy in Fort Myers. She arranged to donate Seminole Lodge to the City of Fort Myers in 1947 for $1 in Edison’s honor and to educate the public on how he impacted the community. When she made the agreement with the city, Mina requested that Bob Halgrim be selected as the first curator of the property. Halgrim agreed and a few months later, the estate was open to the public.

As Curator, Halgrim made the decision to develop a museum filled with artifacts and historical collections related to the Edison family. He wrote to and visited many sites across the country that could possibly loan items to display in the exhibits. Some pieces they acquired were donated, and others were bought by Robert Halgrim and the City, including antique phonographs and cars. The Museum officially opened on February 12, 1966, and Edison’s son Charles had the distinct privilege of being the guest speaker at the event. When the site first opened, no more than 30,000 people visited a year – compared to more than 220,000 visitors annually now.

Although he never graduated from Cornell University, Robert Halgrim received an honorary certificate from the college in April, 2005 for his achievements and dedication to developing Edison and Ford Winter Estates into the site that it is today. Throughout his life, he was also an active member of the Ft. Myers Chamber of Commerce, Edison Pageant of Light, Lions Club, and founding member of the Fisherman’s class at the First Presbyterian Church.

Today, visitors can see thousands of artifacts in the museum and can take a tour to learn more about the history that makes this cultural gem so unique!