Yesterday we gave you two jumbled words to unscramble and the first lucky puzzle solver to respond received a free plant!  The answers are:

2) calogimusuin = mucilaginous: secreting mucilage, the thick gooey substance in most plants. Mucilage is plentiful in succulents like aloe. 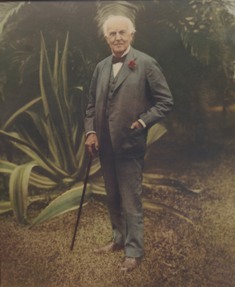 Thomas Edison portrait taken in front of an agave plant on the grounds of his Fort Myers estate.

Succulents are found throughout the world, typically in the dry regions of the tropics and sub-tropics.  With more than 6,000 species, the group is quite varied.  The most well-known succulent product is probably aloe, the product obtained from the plant, Aloe vera, which has been used for centuries to treat burns and other wounds.  Tequila is produced from twelve-year old Agave tequilana plants, a succulent that grows above 1500 meter elevations in Mexico.

The Edisons enjoyed many succulents on the grounds of their Fort Myers home.  A century plant, Agave americana, was ordered from a local nursery in 1886, shortly after Thomas Edison purchased his estate.  Large unidentified agaves can be seen in several photos taken after 1900.  Today, we have many agaves and other succulents planted on the grounds and a collection of unique agaves are in pots near the pool. 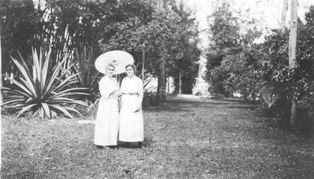 Mina Edison, left, and her sister, Mary Miller Nichols, near an agave on the grounds in 1906.

Some species of succulents make a great addition to the south Florida yard.  Most will survive our dry winters just fine; however, for some species our  summers are too wet and the plants don’t do well.  Our Garden Shoppe is currently selling a few small succulents that will do well in containers or raised beds.  Succulents in 4″ pots are just $2 – half the price of the big box stores! We expect to have additional succulents, including some larger agaves, in stock soon!