On the morning of September 10, 2017, Hurricane Irma, a Category 4 hurricane with 130 mph winds struck the state of Florida. The hurricanes eyewall passed directly over Cudjoe Key before making landfall in Marco Island that afternoon as a Category 3 with 115 mph winds. Irma reached Fort Myers with 115 mph winds leaving a path of destruction in its wake, including heavily impacting the Edison and Ford Winter Estates. 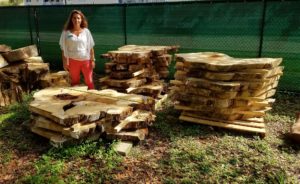 Wood slabs from the Mysore Fig tree felled during Hurricane Irma in 2017.

So reads the introduction to the new Edison Ford exhibit, Creating Beauty from Disaster. It continues:

The massive storm had already devastated portions of the Caribbean. The Prime Minister of Antigua and Barbuda described Barbuda as “barely habitable” after 180 mph winds damaged or destroyed 95% of the structures on the island.

As the hurricane moved across southwest Florida on September 10, it left a trail of tornadoes and storm-surge flooding. The massive storm triggered evacuation orders for 5.6 million people. Hurricane Irma ripped off roofs, flooded coastal cities, and knocked out power to more than 6.8 million people. By September 11, Irma weakened to a tropical storm and moved north toward Georgia and Alabama. By September 13, it had dissipated over western Tennessee.

Hurricane Irma caused an estimated $50 billion in damage, making it one of the costliest hurricanes to ever hit the United States. In addition to its monetary impact, the loss of life was equally devastating with 129 direct and indirect deaths attributed to the storm.

Like many other businesses and families, the Edison Ford Winter Estates quickly began the arduous process of cleaning and restoring the site. We were extremely fortunate there was little structural damage to the buildings on site. However, our botanical collection was heavily damaged, losing over 100 large trees, bushes, and palms, including trees planted during Edison and Ford’s lifetimes. Wood from these trees were sold to public and turned into delightful and functional pieces of art and craftsmanship– from disaster has come beauty.

The exhibit, which features many of these unique pieces of art, is on display in the Edison Caretaker’s House through June 6, 2021. Entry is included with admission.