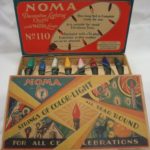 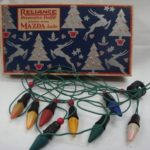 Southwest Florida is home to the winter estates of Thomas Edison and Henry Ford. Best known for his work with electricity and the light bulb, Edison also created early Christmas lights. The Edison and Ford Winter Estates is celebrating Edison’s concept in a different way with a different look this December. In fact, local residents will remember seeing lights of many colors in years past on the Estates grounds. And looking even further back, Thomas and Mina Edison would have used multi-colored lights to decorate for the holidays in the late 1920s and early 1930s.

More than 120 years ago, Thomas Edison created the very first strand of electric light bulbs for use as a Christmas decoration. During Christmas 1880, he strung these strands around his Menlo Park complex in New Jersey, including on the outside of his famous laboratory. Those who passed by via a nearby railroad would have had the privilege of glimpsing the first holiday electric light display.

In 1882 Edward Johnston, Edison’s friend and partner in the Edison Illuminating Company, put together the first strand of electric Christmas tree lights by hand. He wired eighty red, white, and blue bulbs together, and strung them around his Christmas tree at his home in New York City. Interestingly, the tree was not only lighted; Johnson also rigged it to revolve.

However, electricity was still expensive and only in minimal usage in private homes at the turn of the century. Businesses took the next step in promoting the use of Christmas lights. In the late nineteenth century, businesses began using Christmas lights in window displays. At this time, the services of a “wireman” (similar to our modern-day electrician) were necessary to wire the lights to an existing outlet.

Because electricity was both expensive and mistrusted, it took another ten years for Christmas lights to become popular in the home. In 1903, General Electric offered kits of electric Christmas lights to the public for the first time. These lights included miniature base GE/Edison carbon filament lamps. The kits included blue, green, red, and white bulbs.

In 1919, General Electric first introduced the cone shaped Christmas light, which became the industry standard until the 1970s. The Edisons would have used these popular lights to decorate their homes for the holidays.

In 1927 General Electric and the associated Edison Electric distribution companies began to sponsor neighborhood “decorating with color-light” contests as a marketing tool. This strategy was quite successful. By the end of the 1920s communities all over the United States began to hold decorating competitions featuring multi-colored lights. You can imagine the Edison and Ford Estates and the surrounding neighborhood homes brightly lit with multi-colored Christmas lights during this time.

This year, historic McGregor Boulevard Royal Palms will be decorated with colorful holiday lights. The two Estates will include colored lights and historic decorations as well as some high tech lighting examples that Edison would have enjoyed, such as new LED versions and laser projections in the trees.