Heat and bring to boiling point sugar, molasses, shortening (part of which should be butter), ginger, cinnamon and cloves.  Remove from fire and cool.  In the meantime, mix and sift the salt and flour and stir part of it into cooling mixture.  Dissolve the soda in a tablespoon of warm water and beat into the mixture then stir in the remainder of flour.  Roll out to about ¼ inch thickness on a floured board and shape with a floured cutter.  Place on small buttered tins allowing space for spreading.  Preheat oven for 10 minutes at 350 degrees.  Put in oven and bake for 7 minutes. 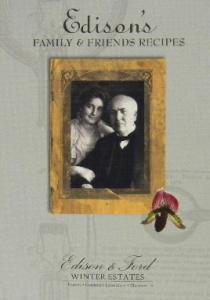 The Edisons’ recipes were written during their lifetime, therefore the directions, measurements and styles of the recipes reflect the period in which they lived and their personal tastes.  Because the recipes are original for the times, you will want to read them carefully and experiment liberally.  We know you will enjoy a look at heir lives as well as their scrumptious recipes.

Our collection of vintage recipes can be found in Edison’s Family & Friends Recipes which is available in the Edison and Ford Winter Estates Museum Store or online at https://www.edisonfordwinterestates.org/store/Edisons-Family-Friends-Recipes.html.