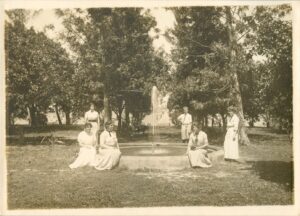 Affectionately nicknamed “Toots” by her relatives, Madeleine Edison Sloane was born on May 31, 1888, and was the only daughter of Thomas and Mina Edison. She attended Miss Henning’s Kindergarten school in Glenmont, New Jersey, and completed her early education at the Oak Place School. Oak Place was a small girls’ preparatory school run by two of Madeleine’s aunts. To aid the children’s success in school, Thomas and Mina Edison administered pop-quizzes during breakfast based on the children’s homework.

Besides attending school, the Edisons valued research and diligent reading as a solid form of education. The world-famous inventor encouraged his children to help him go through volumes of science reference books in the upstairs living room at Glenmont and make notations to aid his laboratory work. There were also five newspapers in the house that the family could read, or anything written by Shakespeare, Charles Lamb, or Tennyson was recommended by Thomas Edison, which Mina often read to the children before dinner. During her free time, Madeleine studied French and read “Little Women.”

Starting in 1885, the Edison family wintered at their Fort Myers estate, Seminole Lodge, from January to March through 1931, the year Edison passed away. When the Edison’s were away from their Glenmont estate in New Jersey, Mina often worried about her children missing several weeks of school. Mina spoke to her sister, Grace (the school administrator) and she approved a class trip to Florida for Madeleine and four other girls in 1906. Since the Edison’s Fort Myers home, was too small to house everyone, the teacher and the girls stayed at the Fort Myers hotel; the remainder of the Edison family stayed at Seminole Lodge. Madeleine’s guests wrote glowing letters about their experiences in Southwest Florida and sent them to Mina’s house in Ohio. Classroom sessions were held in a variety of locations, including the Fort Myers Hotel, the end of the Edison pier, and on the Menge brothers’ ships.

During their time at the Edisons’ estate, Mr. Edison thought it would be fun to host a five-day steamship trip up the Caloosahatchee River. Mrs. Edison gave the girls a birding lesson while pointing out a Curlew, an Everglades Kite, and a Turkey Vulture that they saw along the way. After crossing Lake Flint and Lake Hicpochee, they reached Okeechobee. According to the Fort Myers Press, the girls “seemed subdued by the indescribable feeling that comes over one, unlike that felt at sea, to find yourself out of sight of land on the Okeechobee.” When the group returned to Seminole Lodge, they sang a song to honor Captain Menge, who reportedly blushed profusely.

In the fall of that year, Madeleine began her studies at Bryn Mawr, a liberal arts college in Pennsylvania. She found success in her English and drama classes that she shared with two freshmen, Mary Worthington and Peggy James. Peggy’s father, William James, wrote the text, “Principles of Psychology,” an integral part of the undergraduate syllabus. When Madeleine was not attending class, she enjoyed her time as a member of the Glee Club. After her sophomore year, Madeline decided to conclude her college career and return to Glenmont. When she returned home from school, Madeleine spent time socializing with individuals at galas and attended football games in Hoboken with her boyfriend, John Eyre Sloane.

She continued to keep in contact with her college acquaintance, Peggy James and invited her to Seminole Lodge after her father passed away. Peggy’s spirits lifted when she saw the white walls, red roof, wide porches and French windows of Seminole Lodge. The group took a fishing cruise up the Caloosahatchee on the steamer, “Suwanee,” and toured Lake Okeechobee and the Everglades. Peggy was amazed by the large alligators that came up to the side of the boat and the spectacular orchids that were close enough to touch. At night, through her cabin, she heard the “Whippoorwills and Herons and Bitterns and owls calling.” Madeline and her friends stayed at the Gilliland House, which Edison purchased in 1906 and turned into his guest house. According to Mina, they remained independent of everyone else except during mealtime.

At the time, Madeleine was 23, but still exhibited a fun sense of humor when she was with her friends. That humor can be seen in an unsigned, undated document that lists her rules for guests at Seminole Lodge. These rules included:

Madeleine and John Eyre Sloane were married in the drawing room at the Edison’s Glenmont estate on June 17, 1914. Henry A. Brann, director of the St. Agnes’ Catholic Church in New York performed the ceremony, which was only attended by relatives and a few friends. They lived for a year in a fourth-floor apartment on 8th street in New York City, across from the Brevoort Hotel, a famed Bohemian gathering place. They later moved to Plainfield, New Jersey, where John’s family had a thriving biplane factory. John and Madeleine had four sons, who were Thomas Edison’s only grandchildren. Today, there are no direct descendants of Thomas Edison carrying his family name.

During World War II, Madeleine donated much of her time to the New Jersey Red Cross blood drives, serving as the wartime chapter chairmen. She managed more than 1,000 volunteers and a motor pool of 28 vehicles that served her unit. During the four years Madeline ran the operations at the Red Cross, members of the organization packaged 3.5 million sterile surgical dressings and collected 8,146 pints of blood for soldiers who were wounded during the war. When the government committees and board stalled on making decisions to guide the Red Cross, Madeleine stepped in and provided direction for all tasks. As a result of her dedication, perseverance and hard work, Mrs. Sloane was referred to as the Edison version of “Rosie the Riveter.”

Shortly after the war ended, Madeline and her mother, Mina, focused on preserving Edison’s legacy and bringing his story to life. Both of them decided to open the house he was born in, located in Milan, Ohio, to the public as a memorial and museum. Mrs. Sloane served as the museum’s first director and focused on restoring the home to its 19th century appearance, the time period Edison grew up there. The museum opened on the centennial of Edison’s birth in 1947. The Museum was designated as a National Historic Landmark on September 16, 1965. At the dedication ceremony, Madeleine stated, “this museum should be more than just a memorial … we especially want children to get the inspiration that a true picture of him should provide – a better sense of values and to assure them that such qualities as fortitude, industry and independence of thought are still worthwhile and should not vanish from the earth.”

In 1950, Madeleine Edison Sloane was the first woman elected to the Board of Directors for the Western Union Telegraph Company. President, Walter P. Marshall’s hope was that her contribution would help recognize woman’s viewpoints and broaden interests. As a young man, Mrs. Sloane’s father, Thomas Edison, worked for Western Union as a telegrapher. He developed an improved stock and commodity ticket with telegraph equipment, which enabled him to fund his first laboratory. Mrs. Sloane was also a trustee of the Newark Museum and a member of the board for the Salvation Army in West Orange, New Jersey.

Today, visitors can learn more about Madeleine and Edison’s other children during tours of the site and in special presentations held in the 15,000-square-foot museum on Tuesdays and Thursdays at 11 a.m.