Have you noticed the bright orange-red flowers adorning many trees in Southwest Florida lately? That’s probably the royal poinciana, Delonix regia, that you’re seeing. Did you know that these trees might have lined our beloved McGregor Boulevard instead of today’s royal palms?

Soon after Thomas Edison purchased his Fort Myers property in 1885, he sketched a landscape plan for the grounds, which was bisected by a dusty cattle trail that is now McGregor Boulevard. As you can read on the sketch, he wrote, “Royal Poinciana shade trees both sides of street”. However, royal palms were planted at Edison’s expense starting in 1907. Additional royal palms were planted and currently extend about eight miles along McGregor Boulevard. 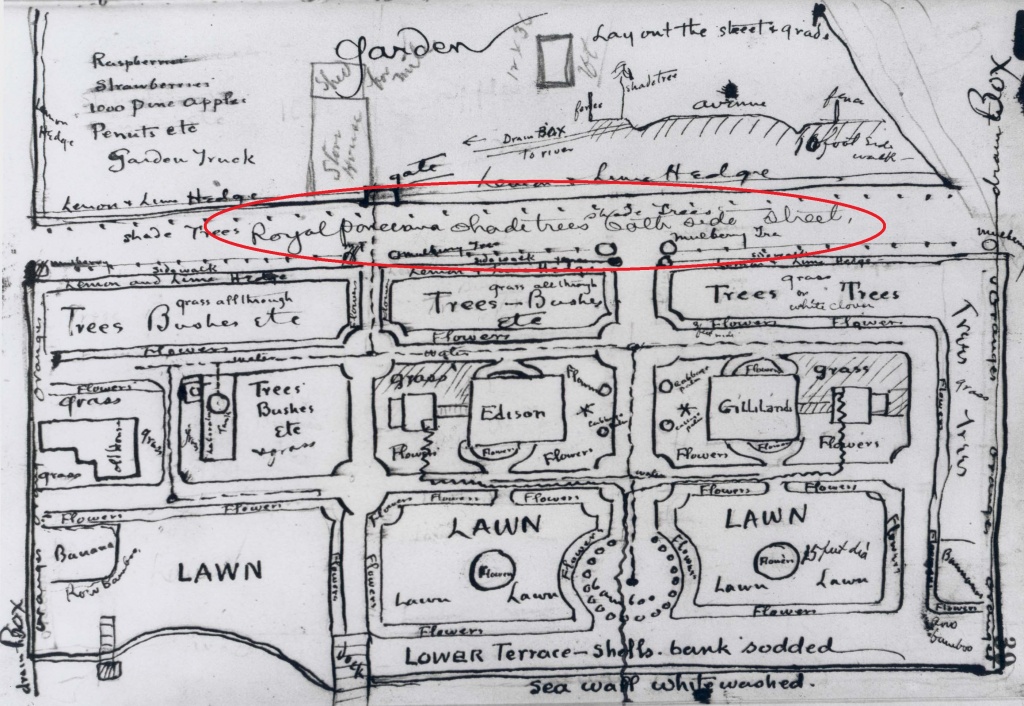 Today, Ft. Myers is known as the “City of Palms” but had Edison been able to carry out his original plan, McGregor Boulevard might be lined with royal poincianas instead. Why the change? We don’t know for sure. But one theory is that while the royal poincianas are beautiful in full bloom, they usually drop their leaves during winter and don’t start blooming until late May. Edison and his family typically visited his Ft. Myers home during the winter, right when the royal poincianas look their worst, and he would have returned to New Jersey before the red blooms put on their show in late spring.

The royal poinciana is native to Madagascar, where it is endangered. It is a fast-grower and is accustomed to our poor soils and winter droughts. If you’d like one for your landscape, we have several for sale in our Garden Shoppe. For more info on selecting and caring for a royal poinciana, visit this page created by the scientists at UF/IFAS. If you don’t have room for a large tree, consider the dwarf poinciana, which matures to 15 ft in height. We carry the dwarf poincianas in our Garden Shoppe as well. If you’re thinking of adding a flowering tree to your yard, be sure to attend our Flowering Trees Class this Saturday, June 8. More info on the class is here.