Have you seen the flower of a ficus tree?

The fruits of most ficus trees (like the Estates banyan) are called figs.  The fig is made up of stem tissue and the flowers of the tree are inside the fig.  All figs are pollinated by a female wasp that enters the fig through a tiny hole at the end of the fig.  Once inside, she lays her eggs and dies but the pollen she collected (from the fig she hatched in) is deposited on the flowers inside the fig.   Other wasps may also lay eggs inside the fig.  When the larvae hatch, the males mate with the females and then dig a tunnel through the fig for the females to exit.  The females have collected pollen during their time inside the fig and seek out another fig tree to deposit their eggs.  The pollinated figs will ripen and produce seeds, which are eaten by other animals and dispersed; thus, the cycle continues

Many figs can only be pollinated by one species of wasp.  For example, the strangler fig (Ficus aurea), a Florida native, can only be pollinated by Pegoscapus mexicanus.  Fig wasps are very small, about the size of a fruit fly, and most people will never see one.  They do not sting.  By the time a fig is ripe, the flowers inside have broken down and the crunchy parts you eat are the seeds of the fruit. 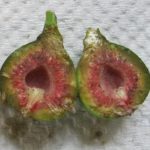 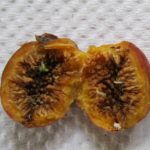