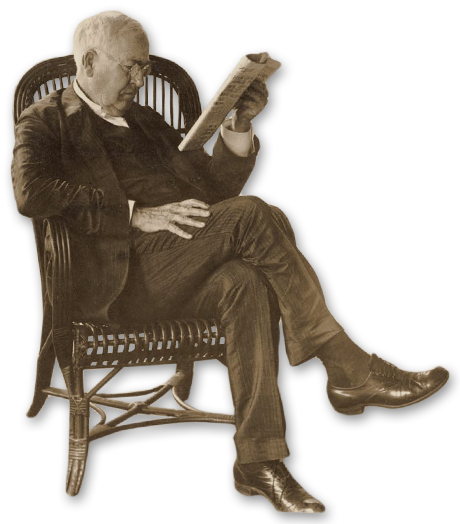 FORT MYERS, Fla. (August 14, 2019) – In celebration of National Drive Electric Week, Edison and Ford Winter Estates is hosting a free electric car show on September 14, from 10 a.m. to 4 p.m. Owners of electric vehicles will be on hand to answer questions and give rides to visitors. The event will take place in the estates overflow parking lots on Larchmont Avenue.

National Drive Electric Week (September 14-22) is presented by Plug in America, Sierra Club, and the Electric Auto Association to raise 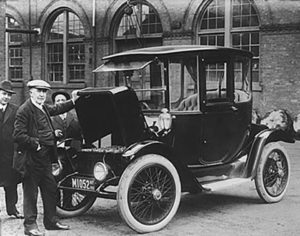 Thomas Edison standing next to a Detroit Electric car in 1913.

awareness of plug-in vehicles and highlight the benefits, such as reduced emissions with less impact on the environment than gasoline-powered vehicles.

More than 100 years ago, Thomas Edison and Henry Ford worked together to design an electric vehicle. That project faltered due to the creation of an electric starter for gasoline vehicles, along with inexpensive, reliable gas-driven internal combustion engines. In addition, Edison’s batteries had a limited range, were expensive and unlike today, drivers did not have access to charging stations.

Of the 1,093 patents Edison held, several related to the electric car. In 1889, Edison’s electric vehicle (runabout) was produced. In 1890, he patented the means for propelling electric cars and his driving mechanism for cars was patented in 1892. The Alkaline battery was initially designed with the thought of powering an electric vehicle, but it was used for a multitude of other things and became Edison’s most profitable invention. He received a patent for his automobile electric system in 1916.

The event is free (does not include admission to the museum, laboratory or tours of the homes). Visitors can learn more about Edison and his inventions inside the 15,000-square-foot museum. Coupons for $5 off admission to Edison and Ford Winter Estates will be available for anyone attending the event. Visit our visitor information page for additional information about the historic site.