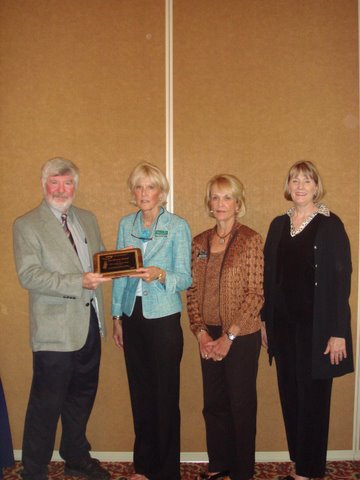 The annual award, given since 1969, is to recognize individuals or organizations actively involved in conservation, preservation, beautification and anti-pollution campaigns that further the growth and appeal of North American travel destinations.  The SATW is a non-profit professional association that works to promote responsible travel journalism and to provide professional support for its members.

The Estates was nominated by Laurie Borman, SATW past president.  Borman said, “I saw an inspiring place where visitors can peek into the lives of two American geniuses.  These homes bring to life the exciting times and lifestyles of the 1920’s, as well as provide a compelling attraction to downtown Fort Myers.  I also visited the homes as a child on vacation, so it was especially gratifying to see that this treasure has been preserved for future generations to appreciate.”

Chris Pendleton, president & CEO of the Edison and Ford Winter Estates accepted the award and said, “We are grateful to the Society of American Travel Writers for this honor.  The Estates staff and Board of Trustees are proud of the newly completed $12 million restoration and will continue to preserve this national historic treasure to provide visitors with a unique historical, scientific, educational and cultural experience.”

For 2009 a total of five Phoenix Awards were designated, the others being, Journey Through Hallowed Ground, Waterford, Virginia; World Bird Center, McAllen, Texas; Gerding Theater at the Armory, Portland, Oregon; and Main Huts and Trails, Kingsfield, Maine.