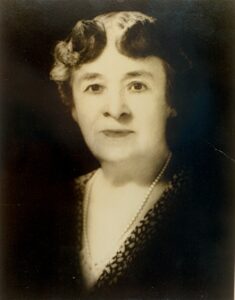 Born April 11, 1866, Clara Bryant was the third of 10 children and grew up on a farm in rural Michigan. She attended school until the age of 17 and shared similar childhood experiences as her future husband, Henry Ford. Meeting for the first time at a New Year’s dance in 1885, they appreciated each other’s serious and ambitious natures. Henry especially liked Clara’s fortitude and self-confidence. After courting for more than two years, Henry and Clara were married on her birthday in 1888. Later in life, Henry was quoted in the New York Times Magazine as saying, “the greatest day of my life was when I married Mrs. Ford.” They had one son, Edsel, in 1893 and together built a strong family nucleus that later sustained them during Henry’s early years in the automotive industry. Nicknamed the “great believer” by Henry, he valued her unfailing support and welcomed her advice on many business matters.

“Her strong leadership qualities, steadfastness and passion” helped advance various philanthropic initiatives and social reform projects for women. Serving as president of the Women’s National Farm & Gardens Association from 1924-1932, she initiated a “Roadside Market” campaign that inspired women from rural parts of America to sell their own home-grown produce at roadside harvest centers, which allowed them to generate their own income. During America’s Great Depression she promoted and encouraged the idea of creating urban gardens amongst staff at the Ford Motor Company. Through her efforts of curtailing hunger and helping those in need, Clara donated food produced by Bryant family farms to several institutions on a weekly basis.

By the 1910s, she had become a vocal proponent for the woman’s suffrage movement by providing both financial and moral support as well as opening her home, Fair Lane, for meetings and cause-related events. She was eventually selected to serve as Vice Chair for the Equal Suffrage League of Wayne County, Dearborn chapter. In 1921, Clara was invited to serve as a Director on the Michigan League of Women Voters organizational board. Serving in various leadership positions, her primary mission was focused on creating and funding programs centered around women’s rights, such as those aimed at building self-reliance, expanding educational opportunities, and providing better healthcare.

Clara’s ultimate passion, however, was horticulture and she hired famed landscape architect, Jens Jenson, to totally transform Ford’s Fair Lane estate in Dearborn, Michigan. Jenson carved out a pond, created orchards, designed a beautiful grotto, and a formal garden space. Furthermore, mindful of Clara’s ornithological interests, Jensen selected plants that would provide ample food, nesting areas, and protection. He eventually placed some 500 birdhouses around Fair Lane. She later commissioned rosarian, Harriett Foote, and landscape architect, Herbert Kellaway, to establish a large formal rose garden (approximately five acres). It featured more than 350 varieties and nearly 10,000 roses. Although much smaller in size, Ford’s Fort Myers estate features antique and heirloom roses of the 1920s era, adapted to Florida’s climate. Clara’s favorites were yellow and white tea roses, and these can be viewed from the front porch of their winter estate.

The proud and resilient Ford matriarch passed away on September 29, 1950, leaving behind an understated, albeit, strong and important legacy built around improving the lives and welfare of women and those considered less fortunate.